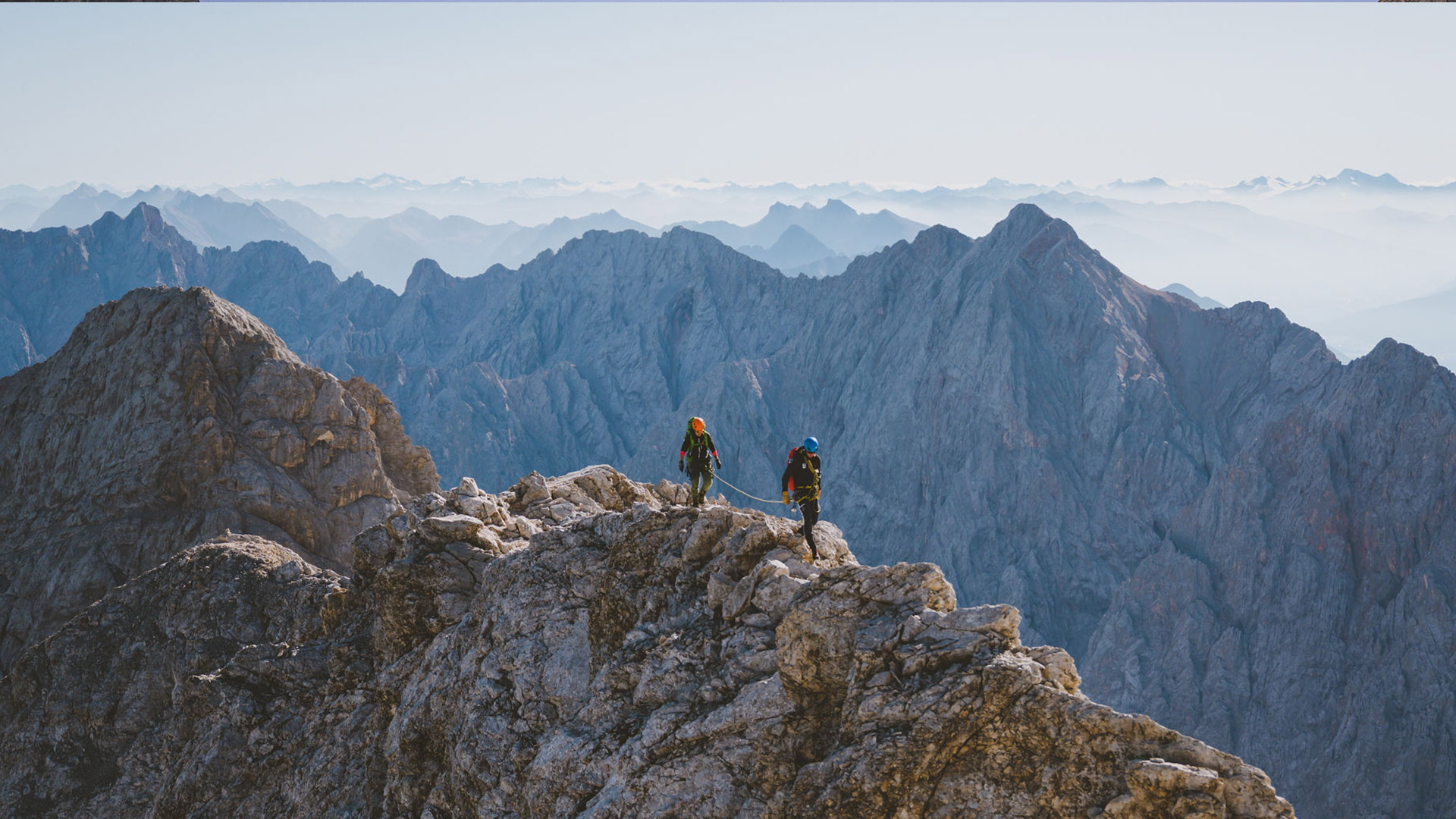 Good fortune and happiness don’t always go hand in hand. The forty lucky mountaineers from ten different countries who took part in the fifth Hanwag Alpine Experience got both. Although it looked like the weather might spoil everything…

It’s the 30th September. The dark, jagged silhouette of the central Alps are lit up by the deep, fiery red alpenglow. A magical spectacle typical of late autumn in the mountains. “Beautiful, just can’t take your eyes off it, can you?” says Flo, a mountain guide. A rhetorical question addressed to no one in particular in the small group that stands watching the sunset outside the Wiener Neustädter Hut. The following morning, they are heading for the Zugspitze’s summit through the Stopselzieher via ferrata. For the moment, it’s hidden by clouds. A final look at the panorama and the mountaineers drift back inside – the hut’s landlord, Guido Schweigl, likes his guests to be on time for dinner and they’ve worked up an appetite. It’s moments like these that make the Hanwag Alpine Experience unforgettable. 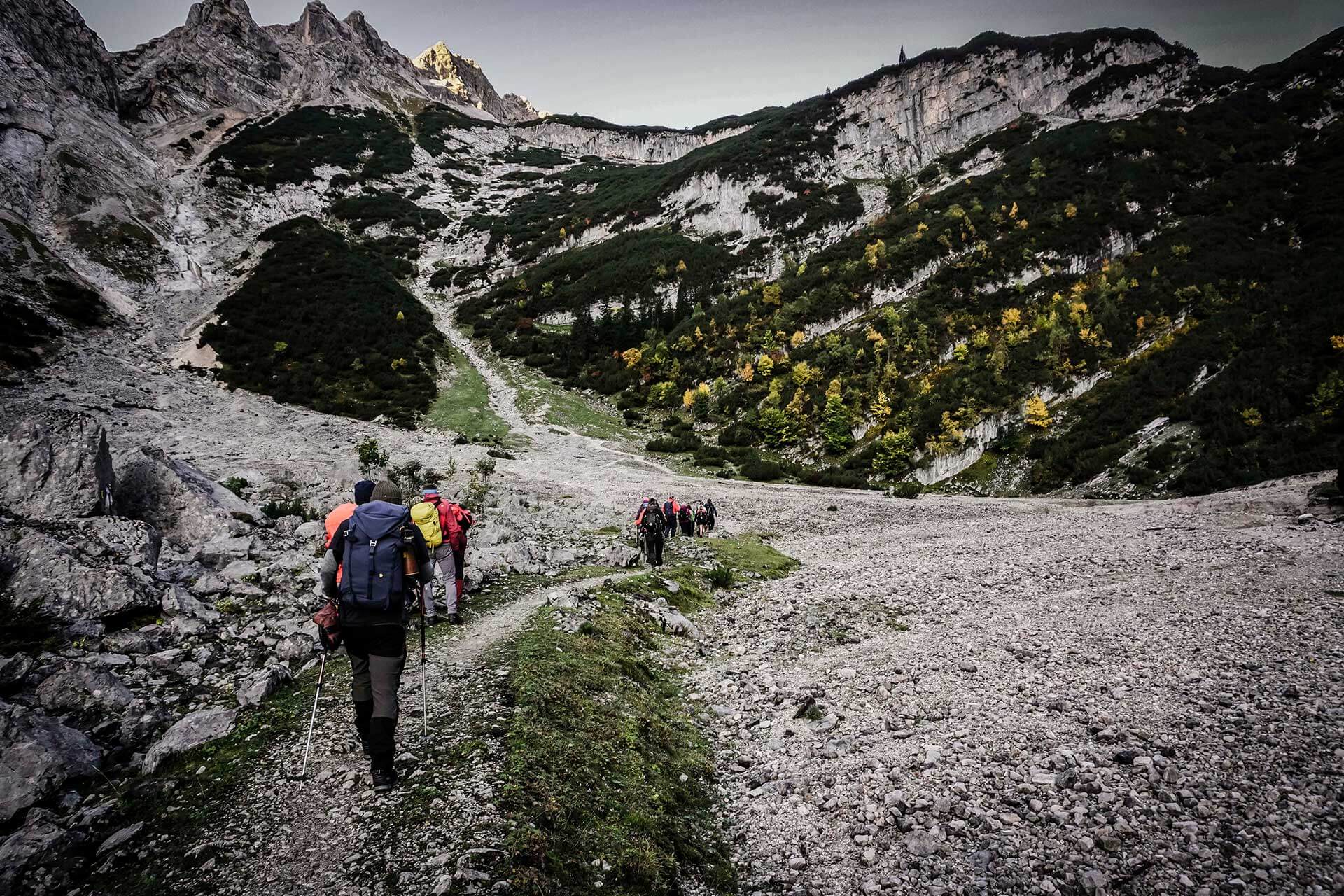 This is the fifth time that the Hanwag Team has climbed Germany’s highest mountain with its guests – customers, retailers and selected journalists from all over the world. Their goal is to reach the top of the Zugspitze, 2,962 metres above mean sea level, and also – by far the more difficult task – to get all participants up safely(!) by four different routes. This is the responsibility of the eleven mountain guides from Hanwag partner Mountain Elements, who are accompanying the 40 participants again this year. For only the second time since the event started in 2014, the weather might make it possible to climb all four routes: Jubiläumsgrat, Reintal Route, Höllental (Hell Valley) Via Ferrata and Stopselzieher (Corkscrew). Each route has its own distinctive charms and challenges. It would be wrong to claim that one is more attractive than another. There is literally something for everyone and for all levels of experience. 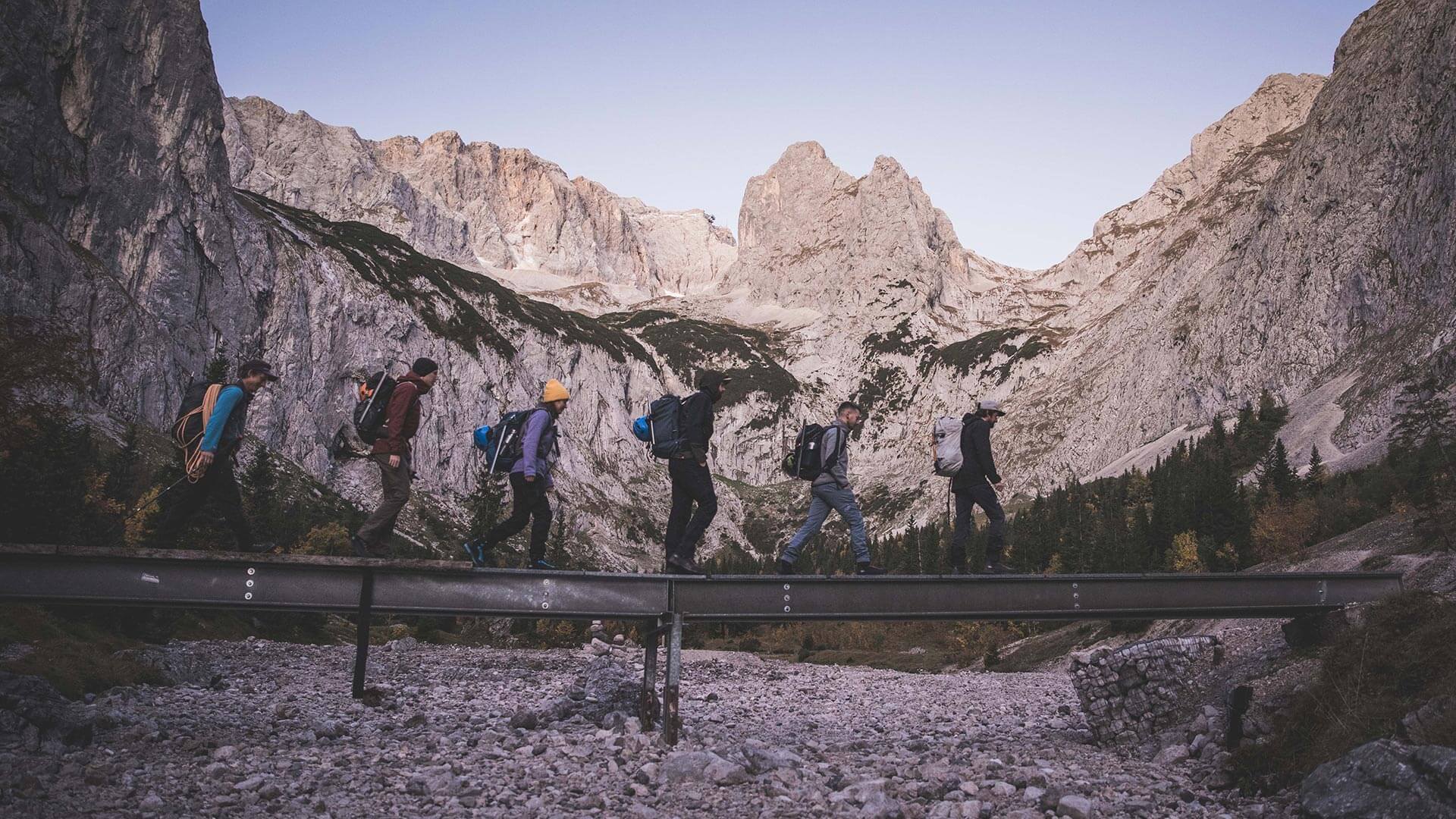 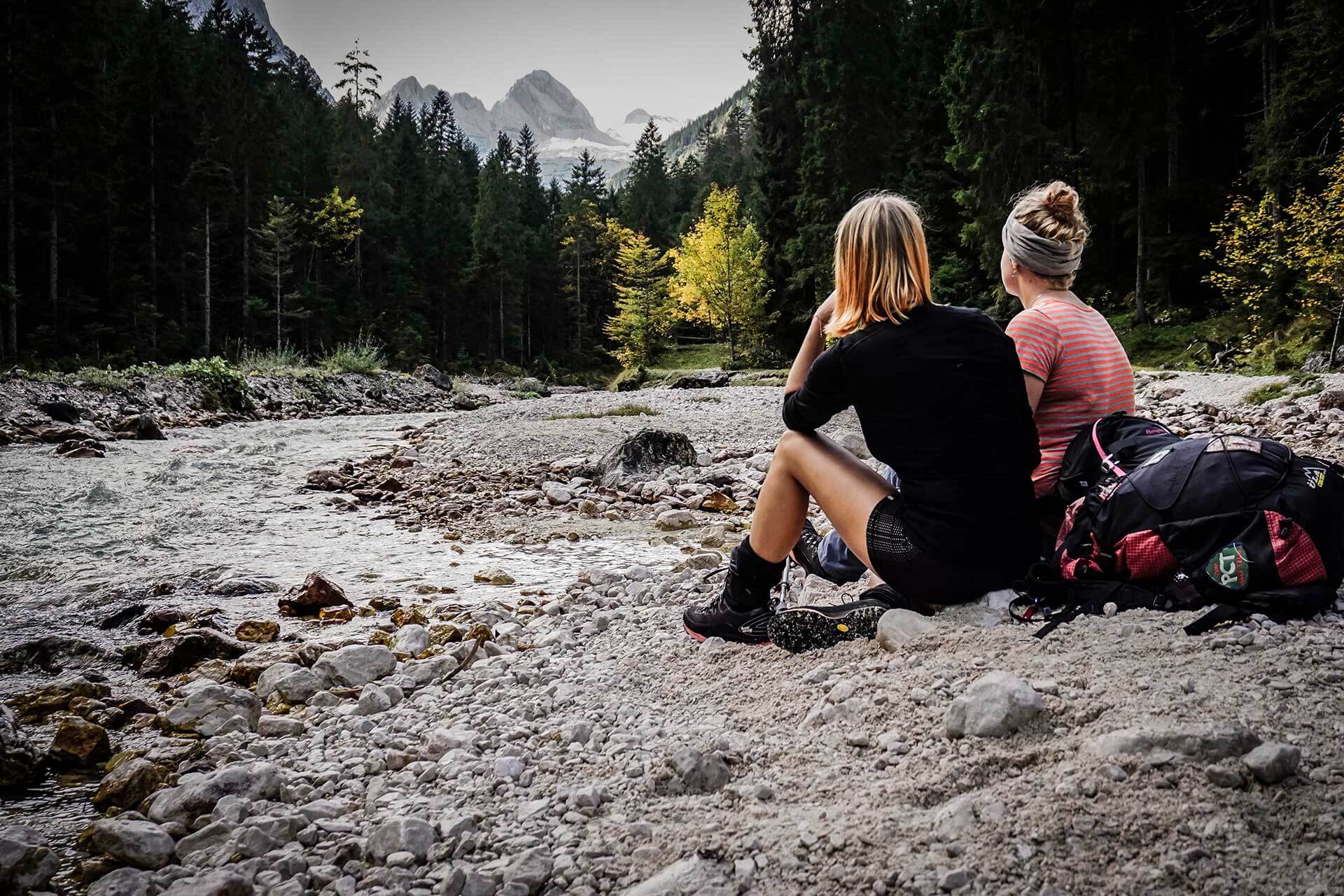 The Jubigrat is technically the most challenging route with its long length, hard scrambling and sections of straightforward climbing, but in extremely exposed terrain. One of the highlights of this route is the Hanwag Alpine Experience red bivouac shelter, which the traditional Bavarian bootmaker from Vierkirchen donated to all alpinists eight years ago on the occasion of its 90th anniversary. 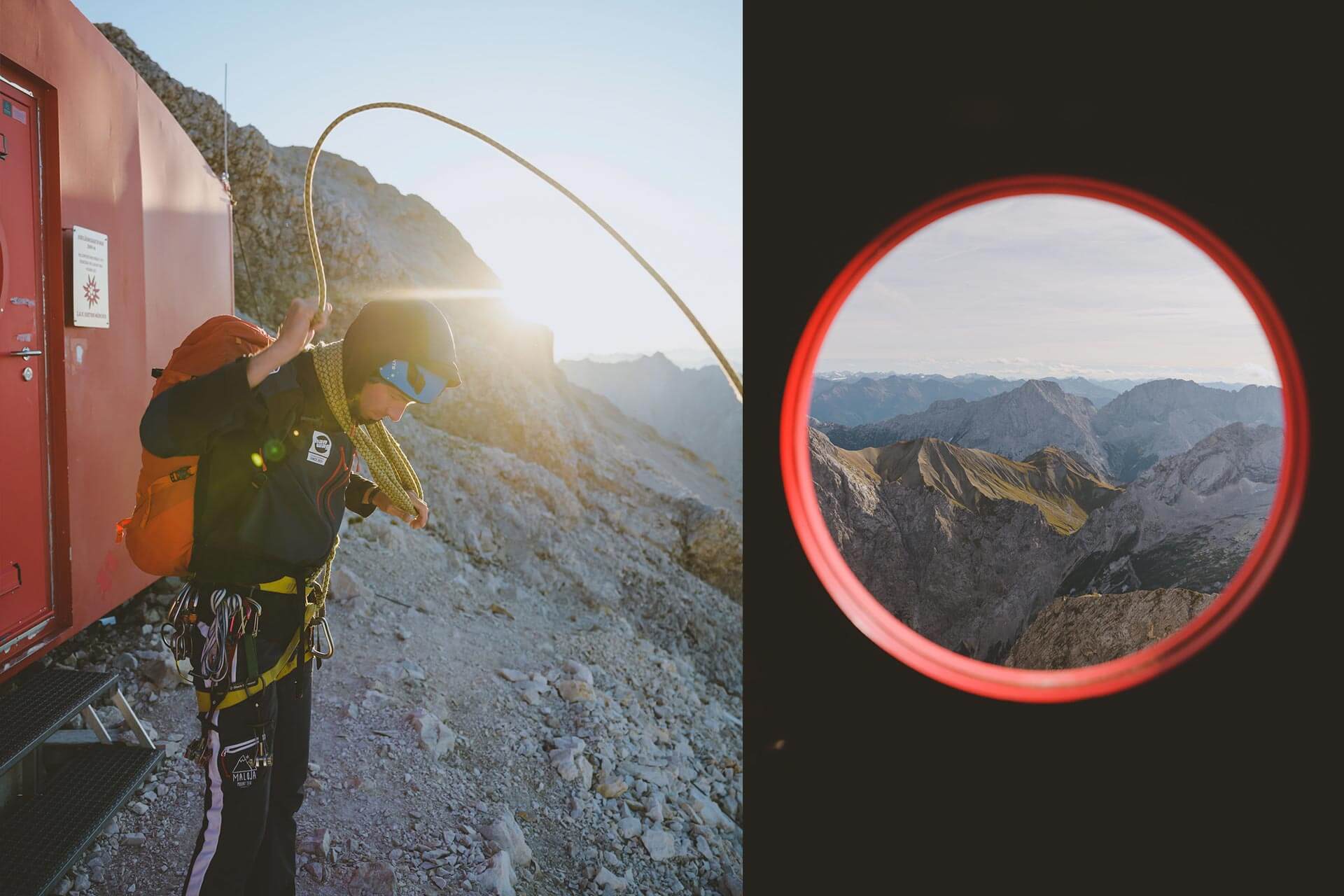 While the other groups get served a hearty meal in a hut, the bivouac shelter is strictly self-catering. However, Michi, the mountain guide has a few tricks up his sleeve. From somewhere out of the depths of his pack, he pulls out a selection of tasty delicacies… and a decent bottle of red wine. As they sit looking out over the spectacular peaks surrounded by a sea of clouds, David, one of the mountaineers is visibly moved. “Absolutely amazing,” he murmurs quietly, almost in awe, with a glass of red wine in his hand. 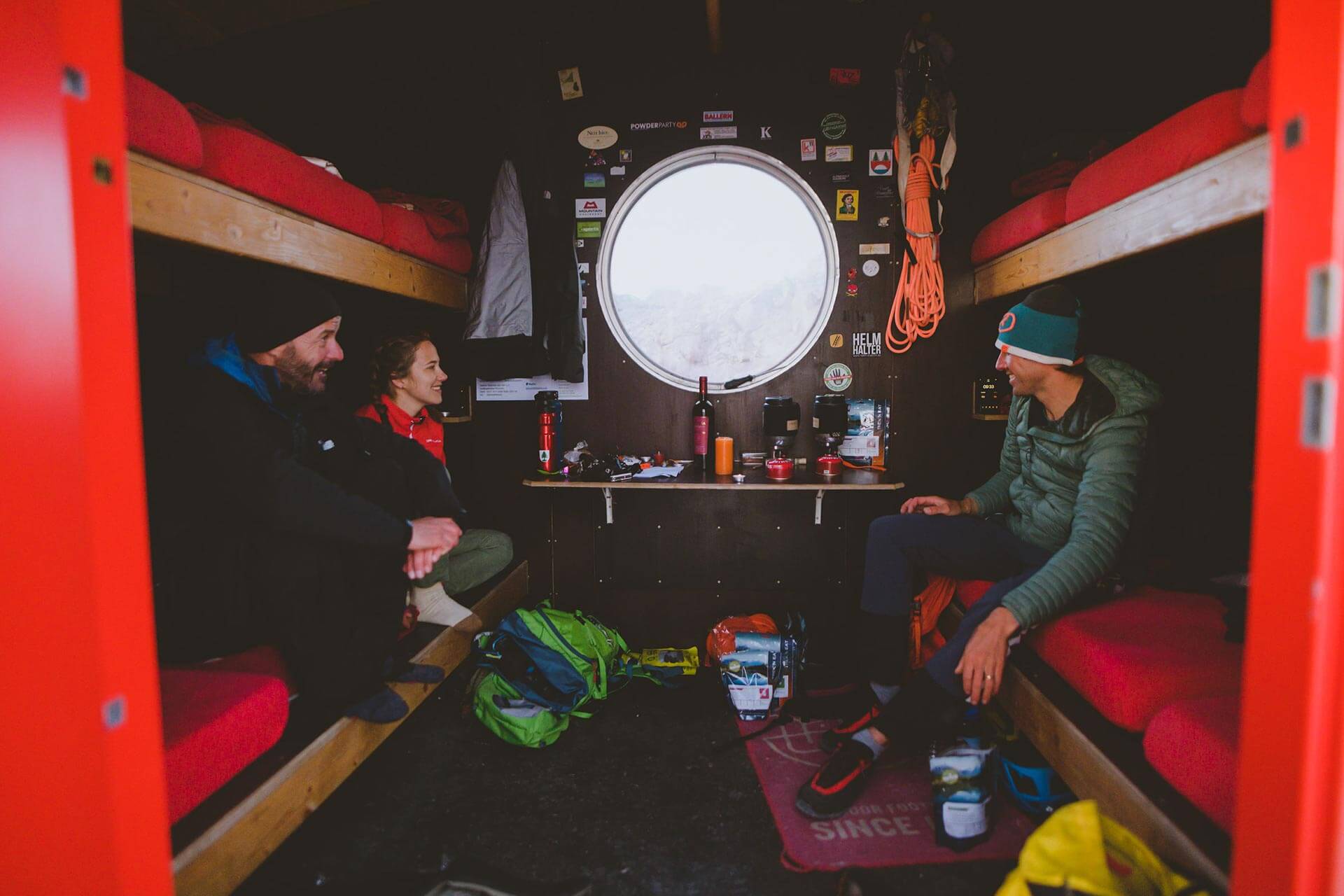 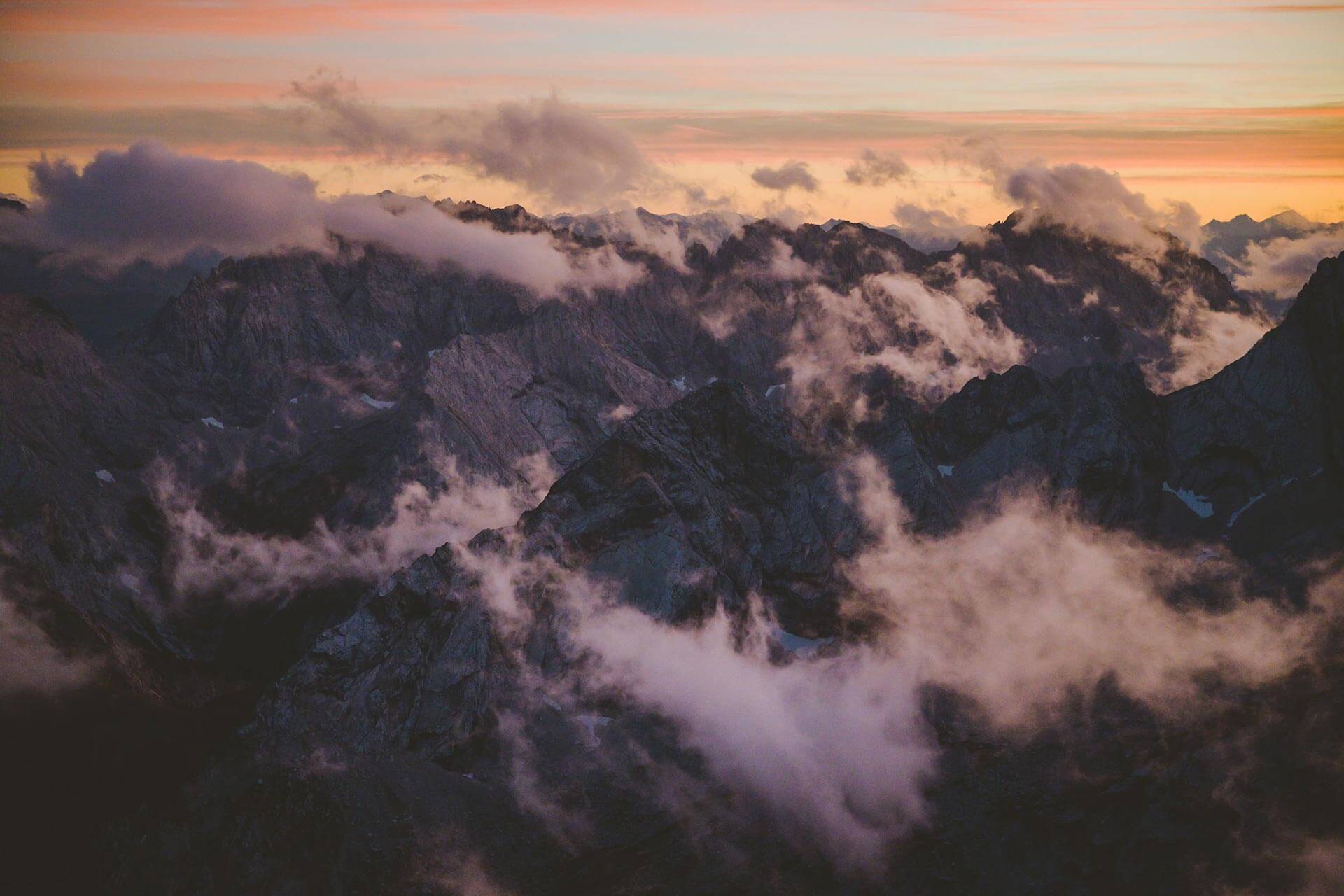 Just a few days previously, it looked as if the Jubigrat would have to be cancelled again this year too. The forecast predicted rain and snow above 2,000 metres. This would have made an attempt unsafe, in spite of the one-to-one client/guide ratio. However, the day before they are due to set out, the weather clears up and all the teams leave as planned – and they get dream conditions.

The Höllental group has the slightly more luxurious option. After being demolished, completely rebuilt and reopened in 2015, the new Höllentalanger Hut boasts a boot room, a drying room and hot showers – a rare and much discussed comfort at mountain huts these days. “It’s really fantastic,” says Johannes from Baden Württemberg, enthusing about their stay. With its 2,200 metres of elevation, the Höllental Route offers unbeatable variety and, as such, just about everything you might want from a high-alpine mountain tour: from hiking through the spectacular Höllental Gorge via the – sadly visibly retreating – Höllental Ferner glacier, which requires using crampons, to the long via ferrata with its iron rungs and steel cables for protection that leads to just below the summit. 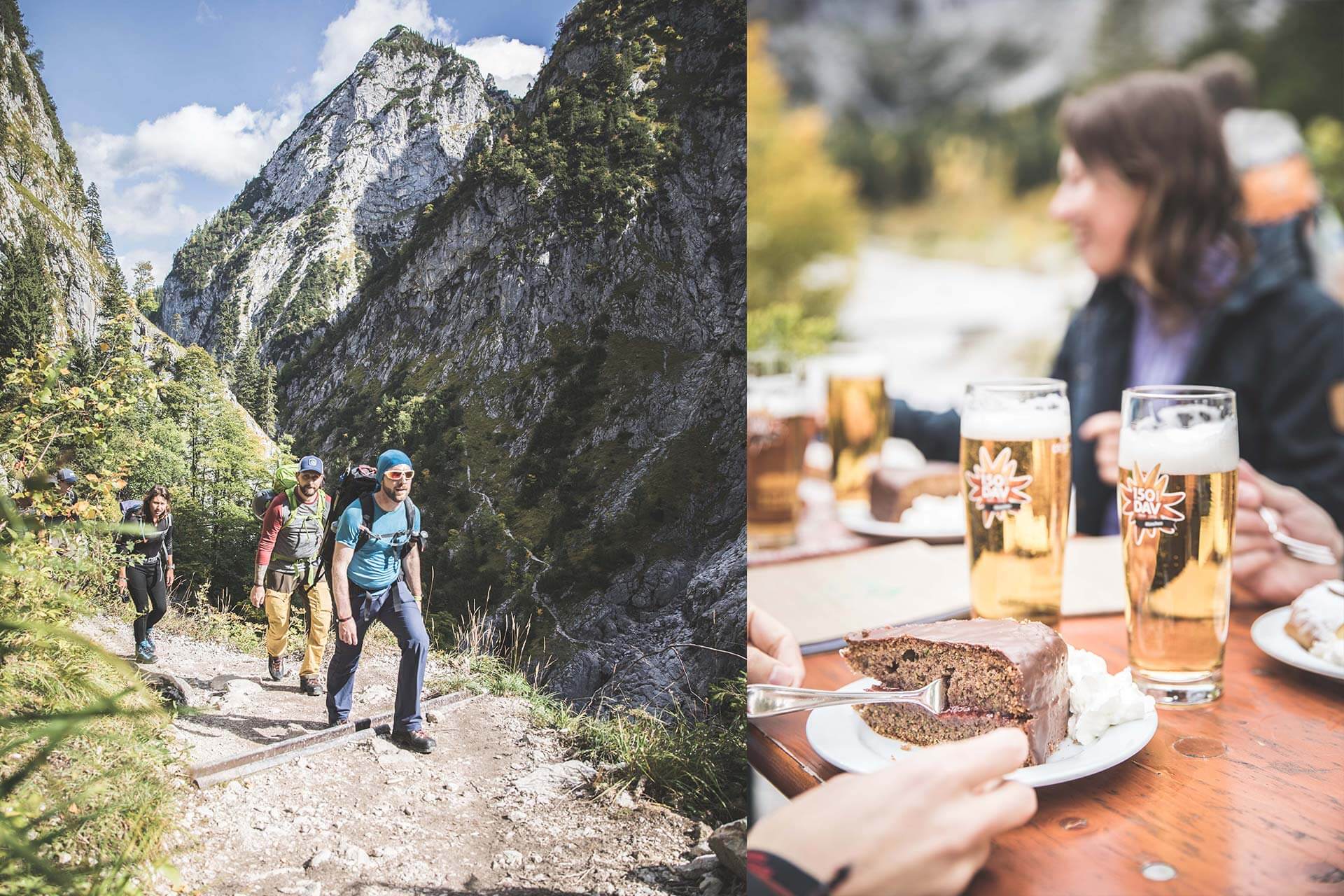 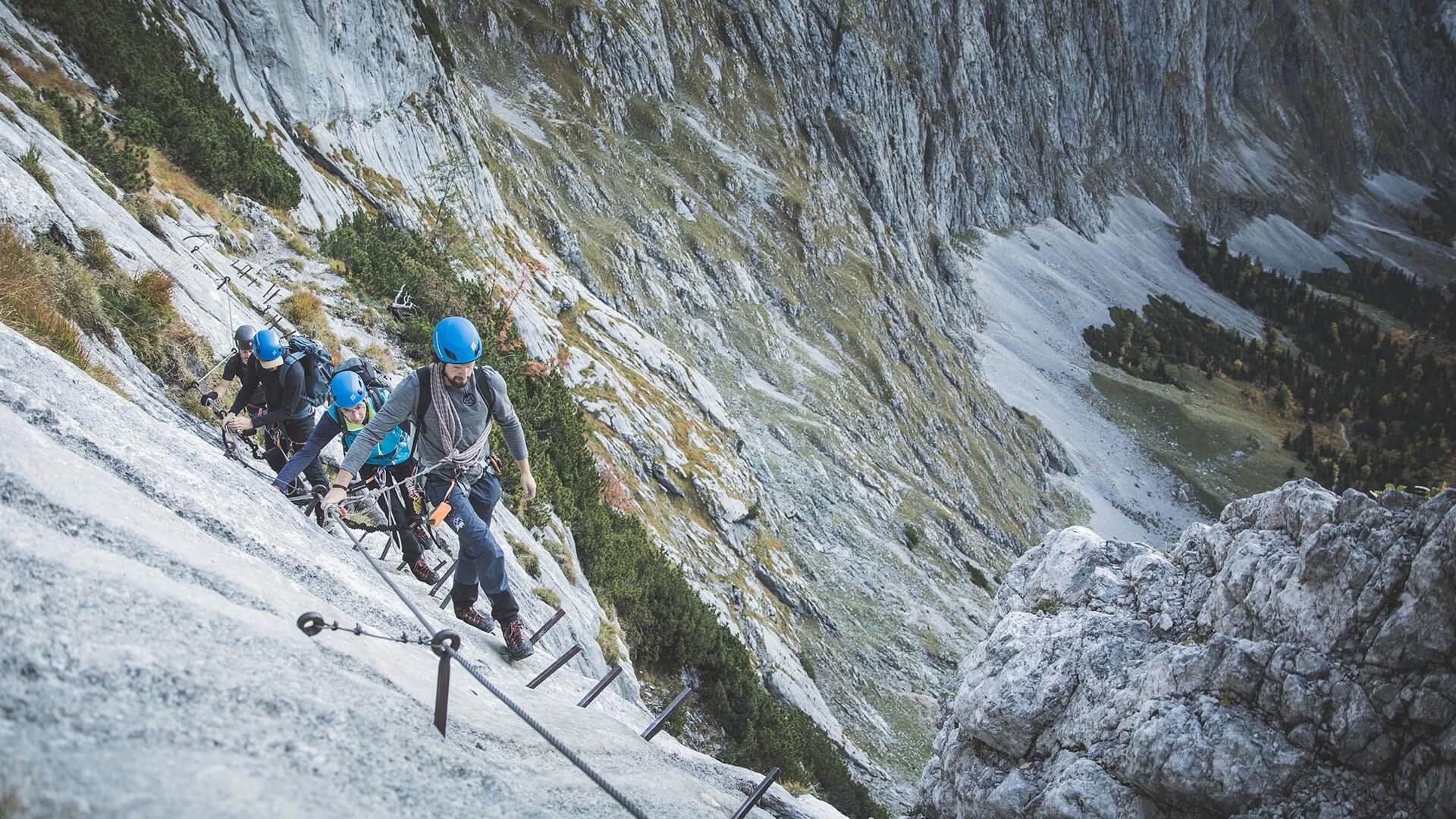 Here, it becomes clear just how well organised the Mountain Elements guides are. With perfect timing, the three groups from the Jubigrat, Stopselzieher and Höllental routes reach the summit at virtually the same time and have only to fight their way to the summit cross through the crowds who have travelled up on the cable cars. 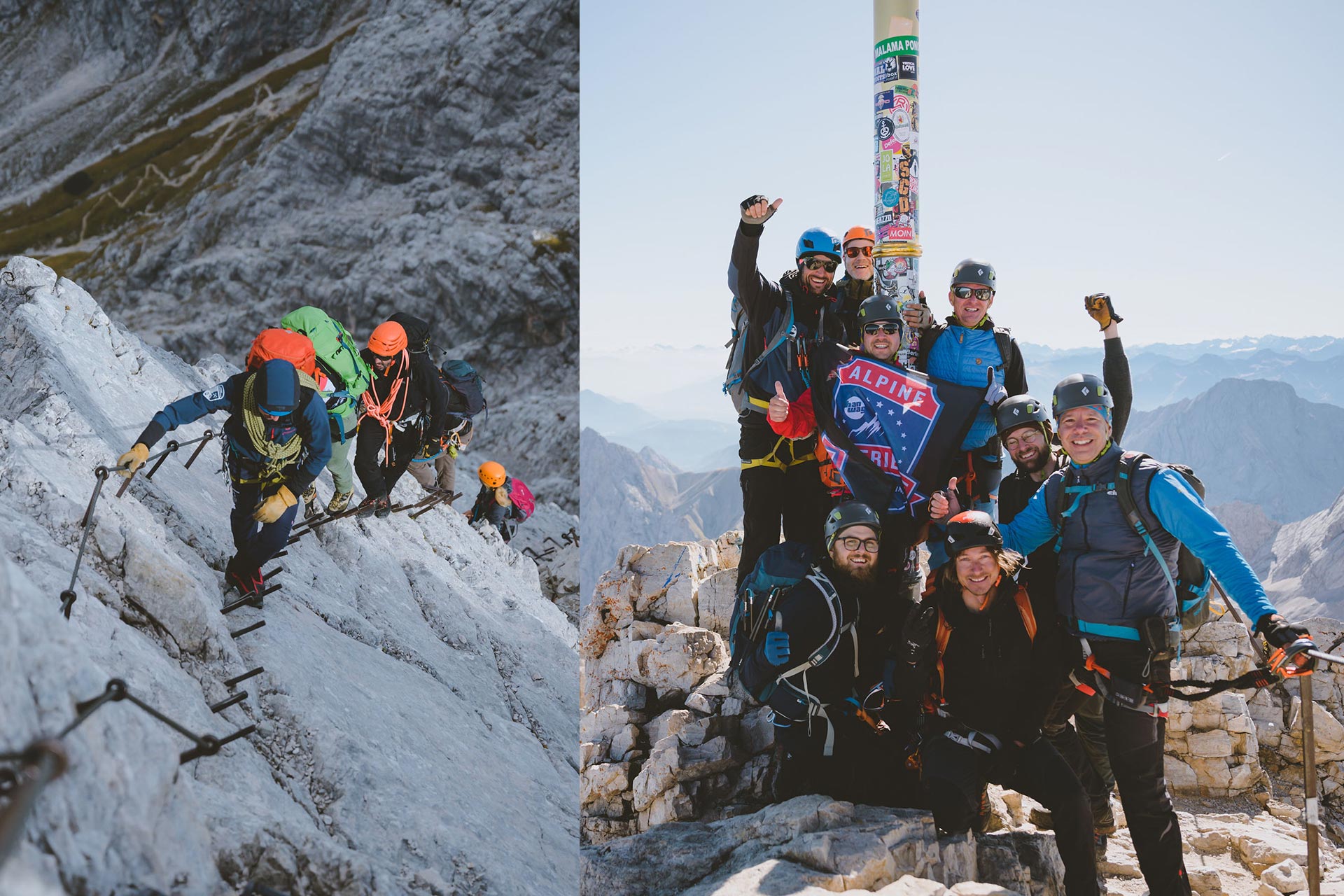 The Reintaler group arrive shortly afterwards. Having covered 21 kilometres with 2,300 metres of height gain, they had the longest and “highest” route to climb. The Reintal route is without doubt one of the most beautiful ways to climb the Zugspitze, and in combination with the spectacular Partnach Gorge, represents a genuine highlight for all mountaineers. 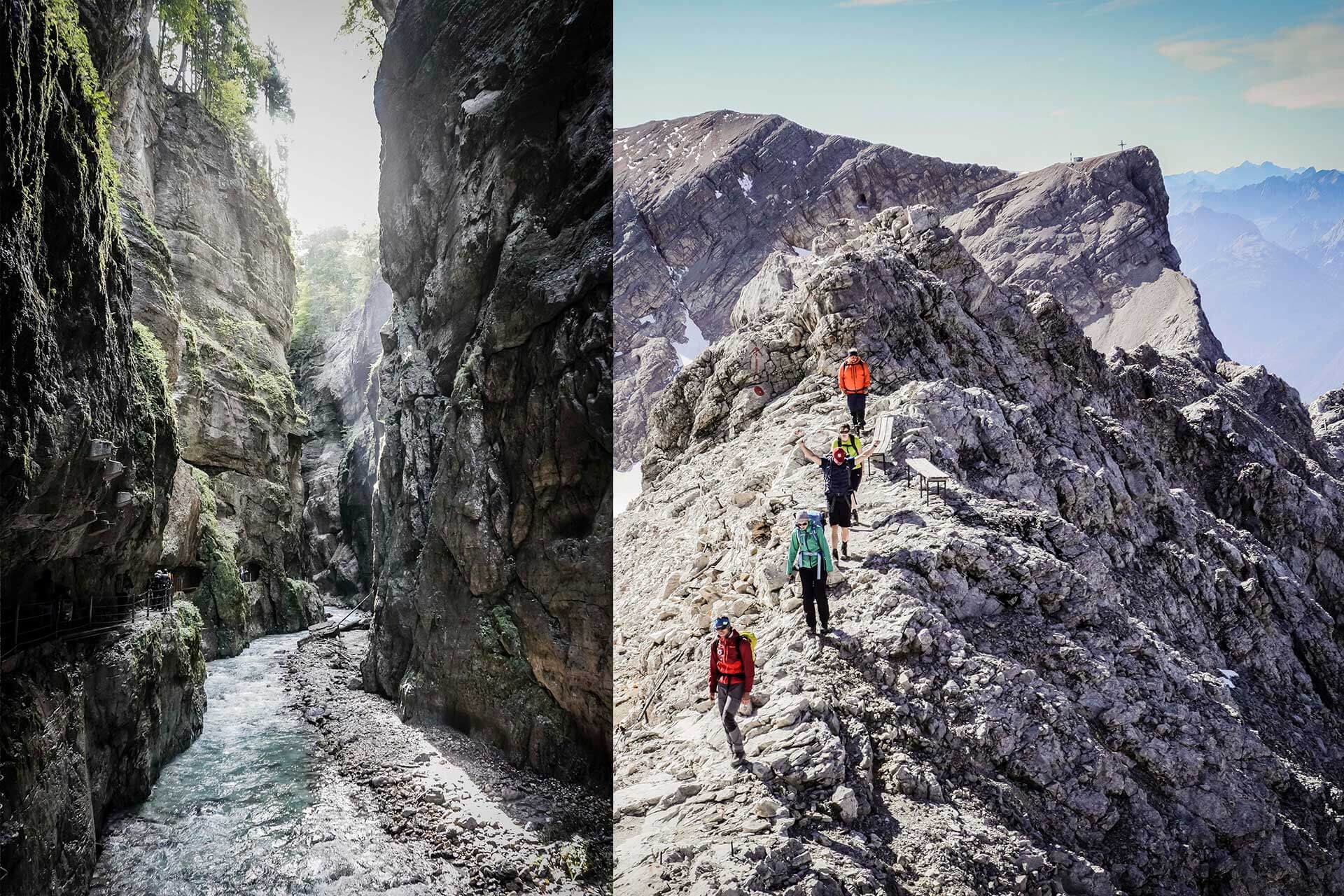 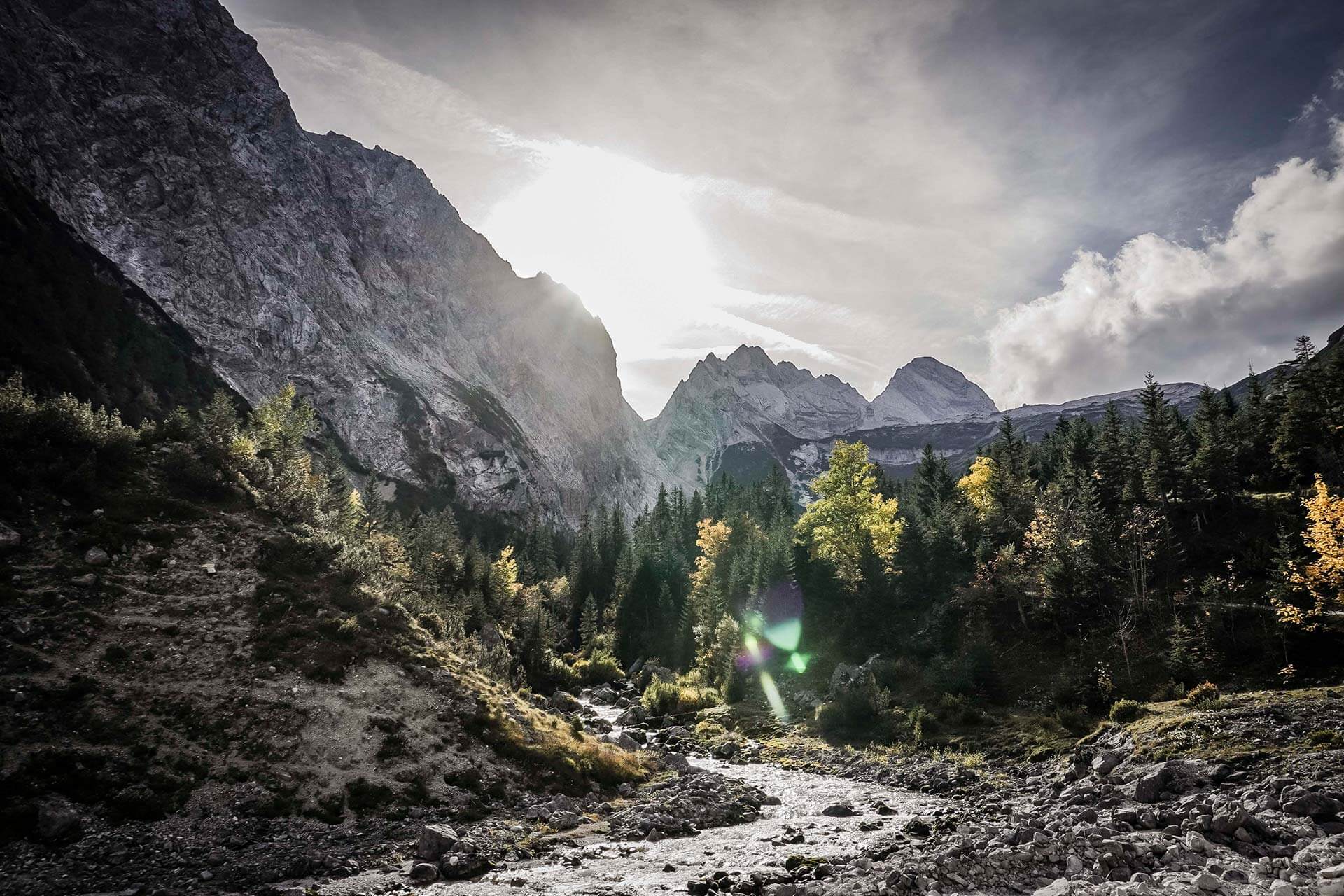 Celebrating a successful ascent in the Münchner Haus

Back together again, all 40 mountaineers and eleven mountain guides toast the successful Zugspitze ascent and enjoy a well-deserved meal. “I’m overjoyed at how well it’s gone this year,” comments Hanwag Head of Marketing, Christian Wittig, with a big smile. “The Hanwag Alpine Experience participants are all united by their passion for mountain sports. The feeling of being on this mountain, Germany’s highest peak, and climbing as part of this group, experiencing the enthusiasm of each individual involved, not to mention also seeing how well our footwear performs in hard conditions, without needing to be worn in, is just overwhelming.” 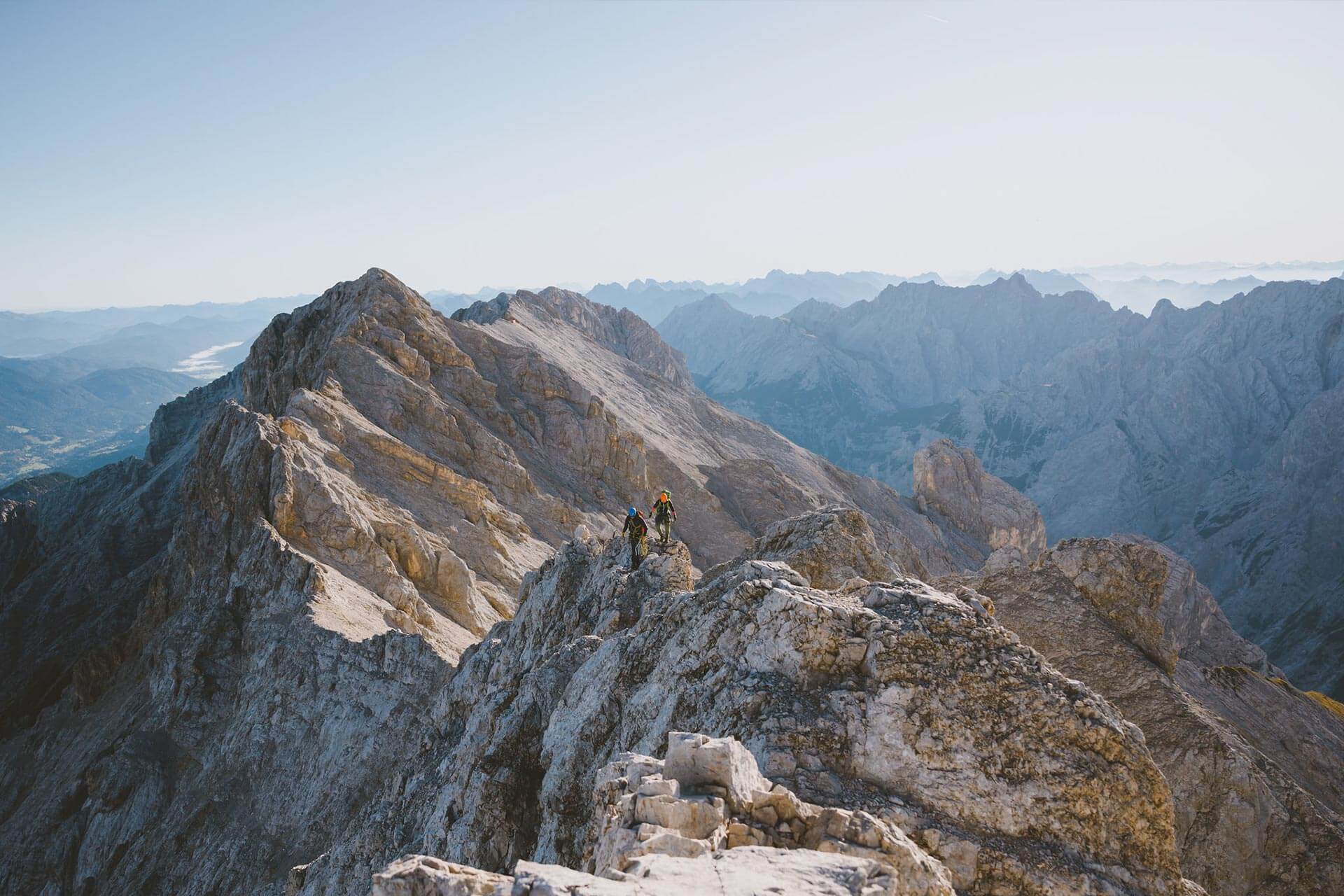 Depending on the chosen route, Hanwag equipped all participants with the new Ferrata II GTX and Alverstone II GTX.

“The feedback on our boots was exceptionally positive,” notes a happy Albrecht Volz, Country Manager Hanwag Germany that evening as participants, mountain guides and members of the Hanwag team round off the event together at the lovely Eibsee Alm on the shores of Lake Eibsee and revue the many wonderful moments of this year’s Hanwag Alpine Experience.

“I’m already looking forward to next year,” adds Christian Wittig the following morning. “And hopefully, we’ll get lucky with the weather again too.” Hanwag certainly had plenty of luck this year, that night there was over half a metre of new snow above 2,000 metres…